How do you strategize for Axis & Allies? My best 10 ways.

The Axis & Allies board game is just a board game, that’s it, or is it? One player vs another, 3 vs 2, Girls vs Boys..you get the picture!

Being a regular gamer of Axis & Allies, you know it ain’t going to be a walk in the park because your opponent will always pull out something you haven’t seen before, so what do you do, you need that window to strategies.

So here is a list of helpful ways to communicate I have thought of to speed things up! 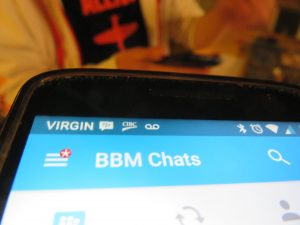 The lazy way to communicate when your team mate is just feet away from you. Just remind them to check there phone!

Get your phone out, charged, and wi-fi password and all that ready. While not your turn, communicate with your other players on a group chat. Blackberry’s BBM has always worked for us. We have however learned it does slow you down due to you are still communicating when it is actually your turn and you’re still texting your team mate, when it should be your turn, and texting is slower than a verbal conversation.

Maybe a house rule where your side can have the game table away from the other side, set a time limit to what you all suits best.

Catching your teams attention on your body language on the moves being created, in hope you are on the same page of course! This doesn’t always work.

Not I, but of course, if at least you and one other of your team members speak fluently in another language, then it’s the real walk in the park. I have even thought about learning Morse Code, and imagine how annoying all that tapping would wind up your enemy! 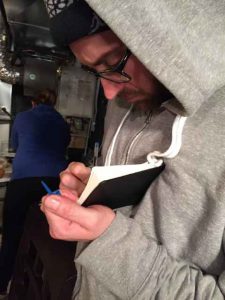 Travis is lost without his Black Book when playing AnA!

I have thought about shouting out loud during the game play of your enemy code names, just like a War Operations. You can dedicate certain predictions or attack plans in code names which only YOU and your side will understand what to do next.

I have recently tried the method to speed games up by sides writing on white boards, small enough to carry around the game board during game play. It is your hand writing and maybe faster than a simple phone text method. You can write as the enemy actually makes the move, rolls the dice and non combats right at the table ( between you and your team mate of course ). Just make sure your written message is readable, makes sense, and then rub it our before if and when your opponent uses the white board! You don’t need to spend a lot, I bought just 2 from the dollar store. 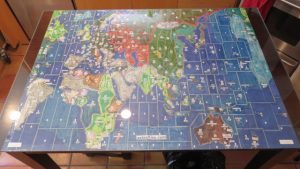 This is my very own custom drawn map for our strategy table. I will be doing a blog and video’s on how I created this.

A regular Axis & Allies group will gradually step up there convenience. If you do have a House Rule to allow your team or the other side to have the table to themselves, how about printing out a copy of the game board you are playing and pin it up. It may be your hallway, upstairs or kitchen ( and kinda ideal cos that’s where your Craft Beer is and food! ) depending your host’s environment. Here, at least it makes it kinda even. You can share picture’s you have taken with your phone, camera or any device to help off table strategies.

Depending on your group environment playing games, you may have it where you are open to what’s going on, and Tongue & Cheek is simply that! Discussing real twists in your plan of attack may be not suggested to discuss openly while the other side is playing, but it may be the relaxed not serious way to play Axis & Allies.

You could also speak out false intentions as a tactic to try and fool with your opponents psychological mind.I actually at times sly a tactical discussion off topic with my opponent on there move to try to distract them from there concentration in hope they’ll mess something up ( on non combat moves I find best! )!

It is possible, if the light allows you, to use your finger’s shadow to communicate on the game board while the other side is playing. It may sound a bit odd, but it can work in a sneaky way. Also, you can place any type of units in the direction you agree on, or maybe you have a code to communicate `If I place this here this way, you know what I am going to do next!’

In our game, we don’t play Axis & Allies in one night, we simply can’t. It’s not because we play slowly, it’s just because even though we try not to drag our turn, this is War! We spread out the next best time to play to fit our work schedule, mostly on a Saturday, and play during the winter where Toronto’s weather is just not fun to be outside. 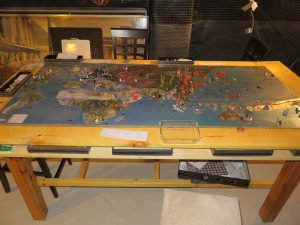 Our Global 1940 2nd Edition Axis & Allies game after a long night. War continues till next time.

So in the mean time between the window of our last game till the next game day, take as many pictures as possible of how the game stands after the last round, and then study moves on your phone, upload to computer if that’s easier. It is surprising how much you learn, and I am constantly on the axisandallies.org website finding out past questions I don’t know just to make sure if what I am planning is legal and allowed.

Meeting up with your team mate is also a good way to try to predict the future new round.

Let us know of any other ways you plan your strategies!